U-1195 was one of the last Type VIIC Submarines built by the Germans in WWII. She was built in Danzin and commissioned on 4th November 1943.

She was moved from training into active service on 1st Jan 1945 under the command of Ernst Cordes. She only sank 2 vessels (about 18,600 tons in total) but  they are known to every south coast diver - they are the James Eagan Layne on 21st March and SS Cuba on 6th April 1945. 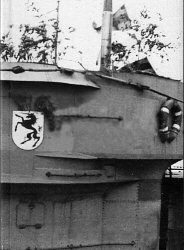 Following the successful attack on the Cuba she was hunted down by the HMCS Monnow and HMS Watchman. A hedgehog strike from the Watchman blew a hole in her hull just forward of the control tower and caused her to flood and sink to the seabed at 30m. The two attackers didn't wait, they marked the site and rejoined the convoy heading to Southampton. Later on the 7th April 1945, the Skirmish(?) reported finding German sailors clinging to the buoy marking the site of the Watchman's attack to the south-east of the Isle of Wight.

The actual number of casualties involved varies from report to report, but it's fair to say there were only 14-18 survivors and between 18-36 dead. German documents suggest there would have been an average crew of between 44 and 52 men for this type of boat. Whatever the true figures, a lot of men died on this vessel, including Kptlt. Ernst Cordes (the captain), hence this wrecks classification as an official War Grave.