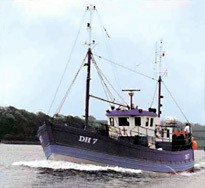 The Fleur de Lys was originally a French trawler built in Brittany in 1969. The Oak built trawler was purchased by a British fisherman in 1989 and subsequently based in Brixham.

On 16th April 2000 while heading back to Brixham a problem with the vessels domestic hot water system resulted in a hot water cylinder explosion! The resultant damage to the vessel meant she rapidly started taking on water. The 4 crew were rescued by helicopter 15 minutes later.

A number of unsuccessful attempts were made to raise the Fleur en-route to Poole, and she was finally abandoned in Swanage bay.