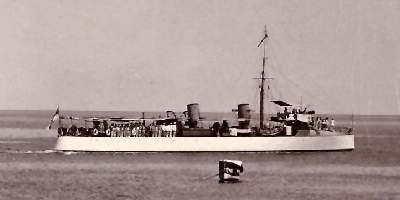 The 260 ton HMS Boxer was one of the Royal Navy’s ‘A’ class torpedo boat destroyers. Build in 1895, her coal powered triple expansion engines could achieve a top speed of over 29 knots!

On February 6th, 1918, she collided with HMS Decoy but survived. Two days later she collided again, but this time with the hospital ship St. Patrick just South East of Dunnose Point. This time HMS Boxer wasn’t so lucky, one crew member was killed, and she was badly damaged – finally she came to rest in the middle of Sandown bay on the 9th of February. HMS Boxer was, at that time, the Navy’s oldest serving destroyer.