ANYONE SEEING THAT the 4526-ton Greek merchant steamer Elena R had been mined and sunk on 22 November 1939, near the Shambles Light Vessel off Portland Bill, might assume that Germany started its war on merchant shipping much earlier than was generally believed. In fact, as the Elena R moved up-Channel with a full cargo of wheat from Rosario in Argentina to be delivered to Antwerp, one of the Kriegsmarines UC-class of minelaying U-boats moved out. The Elena R then struck one of the mines the U-boat had left behind, writes Kendall McDonald. 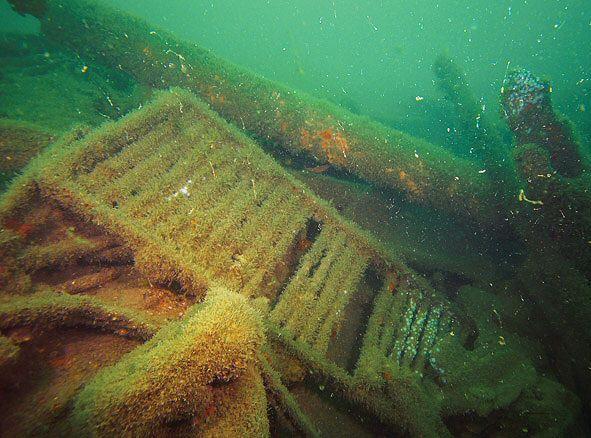 The truth is that the mines were left not for merchant shipping but for British warships out of Portsmouth and other naval ports. The Shambles Lightship was to warn all shipping of the shallows of the Shambles Bank. The Elena R was warned, went wide, and ran straight into the minefield.

The mine exploded on the port side of her bow.

It took nearly 20 minutes for the ship to start sinking, which gave the 24 crewmen time to take to their own boats and get to the light vessel. The Weymouth lifeboat arrived on the scene a little later, and ferried the 24 men from the lightship to shore at Weymouth.

The Elena R was not the vessels name when she was built in 1917 by the Newport News Shipbuilding & Drydock Co at Newport News in Virginia, USA. It launched her as the Munindies, 370ft (112.78 m) long with a beam of 53ft (16.15 metres) and a draught of nearly 20ft (6.1 metres). The power to drive her single screw came from a three-cylinder triple-expansion engine with two boilers, which gave her 471hp.

She was soon bought by a Greek shipping syndicate, which renamed her Elena R, after the wife of its head. It sailed her under the Greek flag, with her home port on the capital island of Siros, one of the 200 Greek islands that make up the Cyclades in the Aegean Sea.

At first, she was used to carry cargoes all around the Mediterranean, and she saw out World War One without incident. Then her voyages grew longer and longer, and when WW2 began she was a regular on the run between Europe and South America.

The wreck was swept during 1959, and divers of that time reported that it was being engulfed by the Shambles Bank.