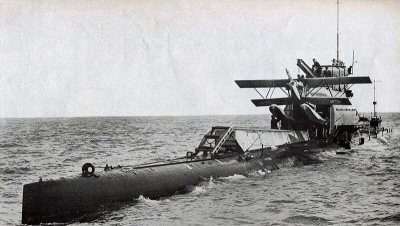 HMS M2 was one of three 'M' class submarines ordered by the Royal Navy at the end of the first world war. She was build by  Vickers at Barrow-in-Furness, and launched in 1919. All 3 submarines were originally armed with spare 12"" guns from battleships!

After the accidental collision and sinking of the M1 submarine in November 1925, both M2 and M3 were withdrawn from front line service and assigned experimental roles. By 1928 the M2's gun had been removed and replaced with a hangar to house a specially designed Parnall Peto seaplane (serial number N255) making her the worlds first submersible aircraft carrier.

On the morning of 26th January 1932 the M2 left Portland Harbour for routine exercises in West Bay. She radioed her tender, HMS Titania, at 10:11 informing her of the plan to dive at 10:30 - this was the last that was hard of the M2. A few days later a coaster, Tynsider, reported seeing a large submarine diving stern first in the West Bay area around 11:15  - but had failed to report it.

By the time the M2 was located 8 days later, all hope of finding any crew alive had passed. Ernest Cox of Scapa Flow fame was contracted to recover the M2 from the seabed. Over the next year his team carried out 1500 dives and managed to raise the vessel to within 6m of the surface, but unfortunately a storm blew up and the submarine broke free and sank again.

All 60 of the crew perished in the accident. Only one body was every recovered - that of the pilot found in the hangar with his aircraft. It was assumed that the M2 had dived at 10:30 as planned, and upon surfacing had opened the hanger doors too soon resulting in the flood and eventual sinking.